I’ve always been in awe of the power weather can have – maybe that has something to do with being a meteorologist’s niece. However, technology is my true passion and what I live and breathe everyday for Patterson. When Hurricane Sandy hit the east coast a few weeks ago, we saw these two worlds collide to become something truly remarkable.

Now, I’m not going to even pretend to know what it is like to live through a hurricane. I live in Minnesota. We simply didn’t feel the physical effects of Sandy here, but my heart goes out to everyone who was – and still is – impacted by the devastation on the east coast. Over the last few weeks, I have been greatly impressed by today’s technology and the impact it has had on several fronts of this #Frakenstorm.

The City of New York offers several great examples of how using technology can help to communicate with and keep residents safe during an emergency. Last year, the city developed a Digital Road Map which was used to help communicate the dangers of Hurricane Sandy and helped plan evacuations. This Open Data platform utilized several sources of information including social media to keep everyone informed of potential risks and where to go to get various types of help. Social media was also used by the New York Police Department, the New York City Mayor’s Office, the Metropolitan Transportation Authority, as well as many others to communicate vital information to those within the city during and after the storm.

With hurricanes in the past, we often see heart breaking images of the devastation that is left after the storm has moved on. With Hurricane Sandy, people from all over the world were able to see effects of the storm in real time. The New York Times set up a camera on the 51st floor of their building which published a picture to their website every 60 seconds as the storm happened and was later turned into a very impactful video. Instagram, Twitter and Facebook were essentially taken over with images posted by those living through the storm.

Not only has technology helped spread these images and the word about how much help is needed on the east coast, it is also helping to raise the funds needed. Now, individuals can simply send a text message to donate to the recovery efforts. Social media also shared stories and images like the one below (which was posted on the 94.9 WOLX Facebook page) that inspire us all to help. 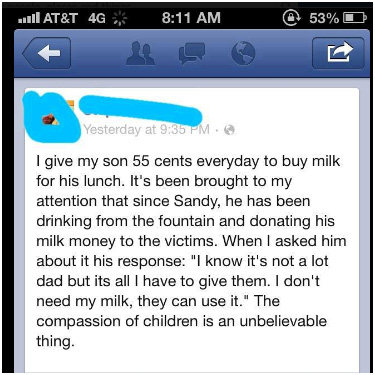 The dental industry was also impacted by Hurricane Sandy, as many offices are still struggling to get back to business. However, we have seen firsthand how technology can help. At Patterson, we used Off the Cusp as well as other social media channels to communicate with our customers and employees who were in Sandy’s path about which Patterson offices were closed, shipments, as well as different ways to get help. We also heard from Marty Jablow about how well one of our newest technology offerings, DDS Rescue, works when it is needed.

Hurricane Sandy had a great impact on the east coast, however the impact technology has had over the last two weeks – and will continue to have long into the future – is something truly remarkable.