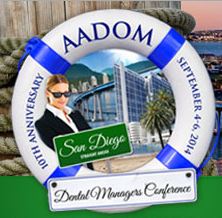 It’s the first time we’ve offered 10 scholarships to the conference, which is packed with workshops, training and networking opportunities. And it’s not just in honor of this amazing organization’s 10th anniversary. It’s also because of what AADOM stands for – the many amazing office managers that keep practices running nationwide.

What do the AADOM conference scholarships cover? There’s complimentary conference registration, a complimentary hotel stay for the nights of September 3-5, and up to $600 in travel/air expenses.

Scholarship winners will be selected based on what they do every day to make their practices better, and also how they support their community. For the first time this year, office managers can fill out an application to nominate themselves for a scholarship – which will happen in addition to Patterson territory representatives nominating many worthy office managers on their own.

This is the sixth year that we have been a Diamond Sponsor of AADOM. There are many reasons we support this organization, but chief among them is that it’s a one-of-a-kind group that focuses solely

on the office manager. Office managers are
often the nerve center of the practice, making sure everything functions properly from front to back office. AADOM provides educational opportunities and networking to help office managers share pains and successes and become even better at their jobs.

To learn more about the Dental Office Managers Conference, please visit dentalmanagersconference.com. And again, we encourage office managers to complete an online nomination form by June 30th at pattersonpartners.com.

Tim Rogan was promoted to <a href="https://www.pattersondental.com/">Patterson Dental</a> vice president, marketing, merchandise in 2010 after holding the North Central Region manager position. Tim’s career with Patterson began in 1993 as a territory representative in the Boston Branch; he then advanced to roles that include equipment specialist, Maine Branch manager and Metro NY/NJ Branch manager.
Total
0
Shares
Share 0
Tweet 0
Pin it 0
Share 0

National Smile Month: 5 ways to get involved and engage your local community

4 ways to get involved on World Oral Health Day