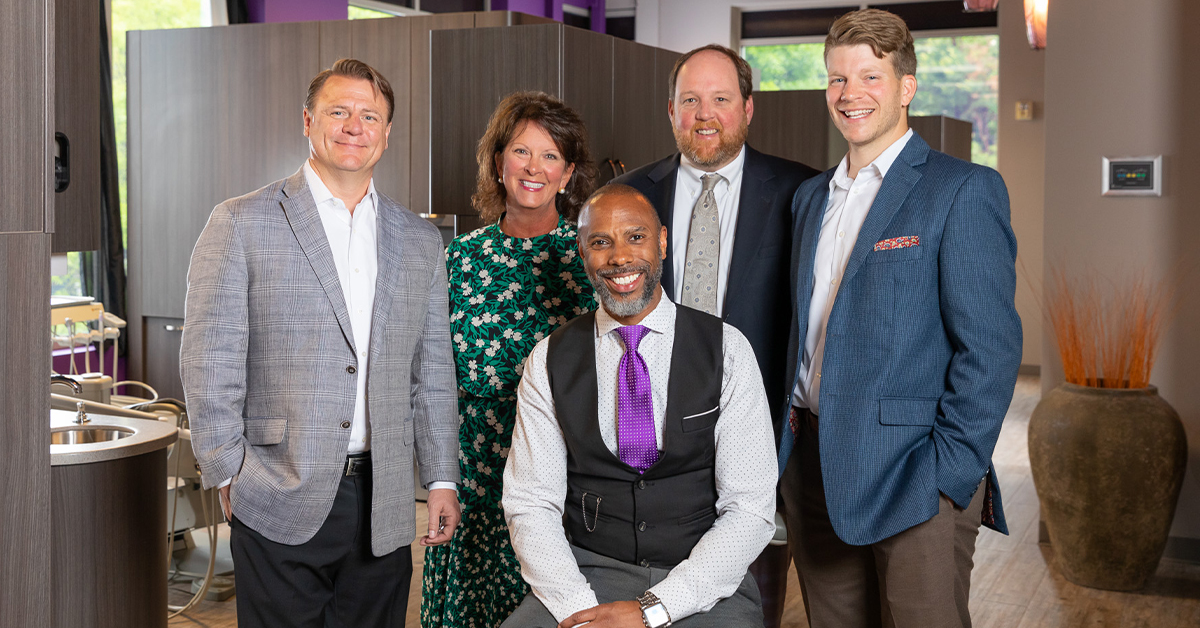 When Jeffrey S. Butts, DDS, decided to expand his services to offer oral surgery, implants, IV sedation and same-day dentistry, he turned to Patterson Dental to help with finding a new location, designing the office layout and nearly every other aspect of his new practice.

When Jeffrey S. Butts, DDS, owner of Camp Creek Dental in Atlanta, decided to expand his services to offer oral surgery, implants, IV sedation and same-day dentistry, he turned to Patterson Dental to help with finding a new location, designing the office layout and nearly every other aspect of his new practice. Unable to expand in his first location due to lease restrictions, he started discussing his ideas with Eric Romano, his Patterson Dental territory representative. They began hunting for a new space and thinking about the types of training and equipment he would need to provide implants and same-day dentistry.

According to Romano, his old dental office was an outdated orthodontics practice with an odd setup. All of the rooms were makeshift with no cabinetry and three-quarter walls separating the operatories. Romano also considered the location of the practice, between a popcorn store and a restaurant, and how relocating could improve Butts’ business. “After being a rock star – how often can you say that about someone? – who spent years touring with and opening for big-name bands, he went to dental school later in life,” Romano stated. “So, when he bought that practice, he just didn’t know what to look for.”

Butts wasn’t doing business with Patterson before Romano arrived at his office. “Like any Patterson rep, we like to bring our customers value-added service,” Romano said. When Butts started talking about finding a new location, Romano asked him what his vision was. “He didn’t really have that all figured out yet,” he explained. “He just wanted to get out of that space and update his equipment.” Romano’s role in the process began in earnest when he connected Butts with a real estate broker, a lease negotiator, a contractor, a Patterson Dental equipment specialist and a Patterson Dental designer.

They finally found the right space: a 2,700-square-foot former dermatology office on the second floor above a medical practice and pharmacy. The biggest challenge was dealing with the first-floor tenants – they had to ask for permission to access their space and try not to disrupt their daily operations. “When the whole building except your space is well established, that’s hard to work around,” Romano said.

Everyone involved had to work odd hours – after the medical office closed and on weekends. The new equipment included dental chairs, cabinetry, a CBCT system, milling machines and surgical suite equipment. Hauling it all up a flight of stairs and hooking it up wasn’t easy for the Patterson techs. Yet while it was difficult to handle hiccups when the medical office was open, the Patterson team kept the overall setup of the space running smoothly and kept Butts from worrying about it. “It’s not a huge building,” Romano noted, “but it’s a much more ideal location with better access and more medical people around him.”

Romano believes that the energy of Camp Creek Dental is what makes it original. It is located in an artsy part of the city, not far from the airport. “It has a downtown loft feeling with high, vaulted ceilings and exposed pipes,” Romano said. “Music is blasting from JBL speakers that hang from the ceilings. Dr. Butts’ custom-made desk looks like it was carved out of the trunk of a huge tree. He has a guitar hanging in his private office and some unique art pieces on the walls. I don’t have any other offices like this one. It’s a high- quality, high-tech, unpretentious, comfortable space. And the whole staff is always smiling, laughing and having fun with the patients.”

As he described the top-of-the-line equipment Butts has invested in, Romano said, “Patients may not realize the amount of technology they just passed on the way to the treatment chair, but they can feel it!”

At Patterson Dental, we are committed to partnering with dental practices of all sizes to help oral health professionals practice extraordinary dentistry. We do this by living up to our promise of Trusted Expertise, Unrivaled Support every day.
https://www.pattersondental.com/
Total
7
Shares
Share 7
Tweet 0
Pin it 0
Share 0

Preparing for success: Cavity preps and the best tools for long-lasting restorations