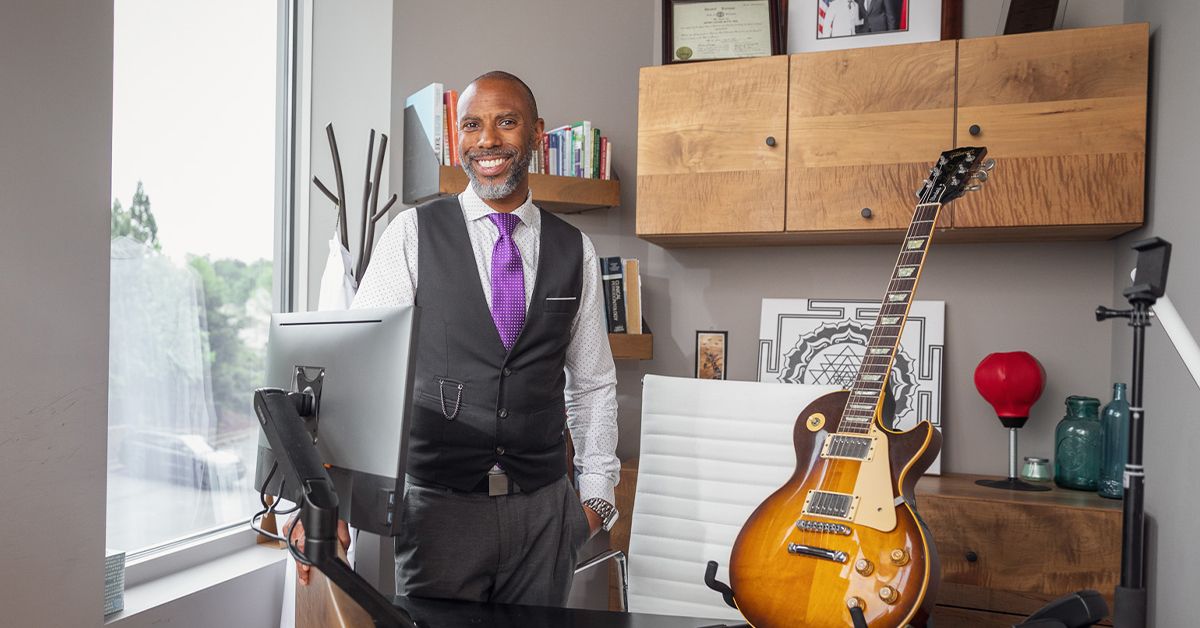 After holding down the roles of lead singer, songwriter and guitarist in two rock bands, Jeffrey S. Butts, DDS, is now the owner of a thriving dental office in Atlanta. So, how did Butts go from a touring rock star to owning his own practice?

How often can a patient say, “My dentist is a rock star,” and mean it literally? Many dentists wouldn’t mind that kind of accolade – and many truly are rock stars in the world of dentistry. But Jeffrey S. Butts, DDS, actually held the roles of lead singer, songwriter and guitarist in two rock bands before he became a dentist. His bands, Shock Lobo and Modern Hero toured with and opened for the Black Eyed Peas, John Mayer, Aerosmith, Stone Temple Piolets and The Roots, to name a few. Shock Lobo released two albums, was mentioned several times in the Billboard magazine and won the VH1 Indy Band of the Year award in 1999.

So, how did Butts end up practicing dentistry? It was a long and winding road…

The making of a musician

Butts originally considered going into real estate. “My dad was a real estate broker, so when I was growing up, I wanted to own real estate up on the horizon,” he said. “I didn’t know that I was going to go into music or become a dentist. I just wanted to be happy.”

Butts started playing guitar at 16 and when he began writing songs and playing gigs, people were responsive. “It was great. I also toured with De La Soul and my best friend, singer Cody Chesnutt,” he recalled. But what he began to feel wasn’t so great was the erratic lifestyle – the pressure of success, the late nights, constant traveling and sometimes run-ins with shady characters.

When he became friends with a woman who was a dentist and learned more about how she helped people, he realized he admired her for her dedication, success and job satisfaction, and began to think that dentistry would be a good second career for him.

Over the years, Butts had moved from New York to Georgia and back a few times for college, eventually graduating from Georgia State in 1998 with a degree in music management. “Because of the band, it took 10 years,” he said.

Charting a new path, Butts went back to college to take the science classes he needed to get into dental school. He attended Meharry Medical College School of Dentistry in 2004 and completed the five-year, post-baccalaureate program in 2009. After graduation, Butts became an associate for three years, practicing and honing his skills in a variety of dental offices. When one of the practices, located on Camp Creek Parkway, came up for sale in 2012, Butts decided it was time to be his own boss and purchased it. Little did he know that he would build out his dream practice a half-mile away just three years later.

“When I bought the practice, I knew that I wanted to expand my services so I could offer oral surgery, implants, IV sedation and same-day dentistry,” Butts recalled. He wanted to have better control over the final outcomes of more advanced treatments as well as keep whatever services he could in-house from a business-model perspective. The idea of providing more comprehensive care for his patients under one roof became the focus for his practice growth. Unable to expand in his first location due to lease restrictions, he started discussing his ideas with Eric Romano, his Patterson Dental territory representative. They began hunting for a new space and thinking about the types of training and equipment he would need to provide implants and same-day dentistry.

Butts purchased a CEREC system so he could start milling his own crowns. He also acquired an Orthophos 3D unit for cone beam imaging and surgical planning. Later, he was invited to the Spear Education Center in Scottsdale, Ariz., where he was introduced to the CEREC Omnicam. He continued investing in Dentsply Sirona technology with the recent purchase of a CEREC Primescan, which has increased the speed of his digital workflow, and he has since upgraded the computer and software for his Omnicam.

A practice reflecting his personality

Camp Creek Dental now occupies the second floor of a two-story medical office building. Sparing no expense on the design, décor, technology and equipment, Butts felt he had achieved his vision for the space. “My office is beautiful,” he said. “It’s super cool and comfortable.”

He wanted the office to represent a functional piece of art, with a design that could help people who usually fear dental appointments and are reluctant to come in feel more at ease in his office. “There’s a very high ceiling in the lobby and a really cool artwork entitled ‘Victory’ by José Awo mounted on the wall,” he explained. “As you walk to the operatories, the ceiling drops back down so it feels like you’re going through a kind of tube. It’s supposed to represent a transition.

“Glass barn doors enclose the sterilization area and the 3D printer so patients can see where the instruments and their aligners are processed. Patients also walk right past the Orthophos imaging unit, which is illuminated by a glowing purple light. It’s very pretty.”

There are seven operatories, including three for the hygiene team and two surgical suites. The design includes two exit doors so patients who have been sedated do not have to leave through the main entrance. “As you walk into the clinical area, the ceiling opens up again, exposing pipes and other mechanical things above so the operatories don’t feel small,” Butts continued. “I hope the design helps make patients feel comfortable and creates a ‘wow’ effect.”

Working with the Patterson group

Butts expressed how much he loves working with Patterson, particularly praising his representative, Romano. “He always points me in the right direction,” Butts explained. “I’d like to be the best dentist I can be, and he helps me make that dream come true.”

Romano described Butts as always interested in gaining knowledge and bettering himself. “He is always striving to learn more to improve his dentistry and offer more services to his patients.” When they met, Butts had just completed his implant and IV sedation advanced training, making him one of only a handful of general dentists who can provide IV sedation in Georgia. “I don’t know if he knew that or not, but it demonstrates his ambition to learn and do more for his patients,” Romano said. “And the new office allowed him to better accomplish his goals.”

Romano attributed Butts’ practice growth to the new location and technologies. “When he purchased the CEREC and started offering same-day crowns, it totally changed his practice,” he said. The two soon realized that there was a bottleneck in the workflow caused by his inability to mill multiple restorations and get them into the oven quickly to meet the increasing needs of the practice. To solve this problem, Butts bought a second CEREC system and made sure he had everything he needed for a totally equipped, one-stop practice.

“He jumped in headfirst,” Romano said with a chuckle. “I’ve never seen a dentist like this! Most people take baby steps to learn each process. But the result is that Butts’ practice has grown tremendously since he moved.”

Butts and Romano also have talked about him hiring an associate, another indication of successful practice growth. “Because I’m there every week or two, I get a good feel about the traffic in the practice,” Romano said. “I suggested bringing in another dentist so he wouldn’t have to refer patients elsewhere or schedule them really far out. He also has talked about bringing specialists in one day a month to do difficult cases.”

Butts likes the control of manufacturing appliances himself. “Manufacturing surgical guides is important to me because I know what I want the implant to do and where it should go,” he explained. “I think having the confidence to execute that type of solution makes me a better clinician.” Determined to add to his capabilities, Butts is learning how to fabricate dentures and partials. “I believe that dentists who use software to design what they want to make will join an era of new ‘super docs.’ We should always strive to be the very best we can be.”

Butts believes his equipment covers all the bases in terms of patient needs. He uses the MoonRay 3D printer from SprintRay to fabricate models and print clear aligners, and a Drufomat scan pressure machine to create night guards and other orthodontic appliances. He also has Blue Sky Bio software for melding CBCT and CEREC images to create surgical guides. After digitally designed prosthetic solutions kept crashing his computers, he purchased three gaming computers to run all the different software.

This blog post is shortened from the original version as it appeared in Best Practice.

At Patterson Dental, we are committed to partnering with dental practices of all sizes to help oral health professionals practice extraordinary dentistry. We do this by living up to our promise of Trusted Expertise, Unrivaled Support every day.
https://www.pattersondental.com/
Total
10
Shares
Share 10
Tweet 0
Pin it 0
Share 0

One thought on “When You’re a Rock Star in and Out of the Practice: Changing Careers Midlife and Rocking Out with Technology”