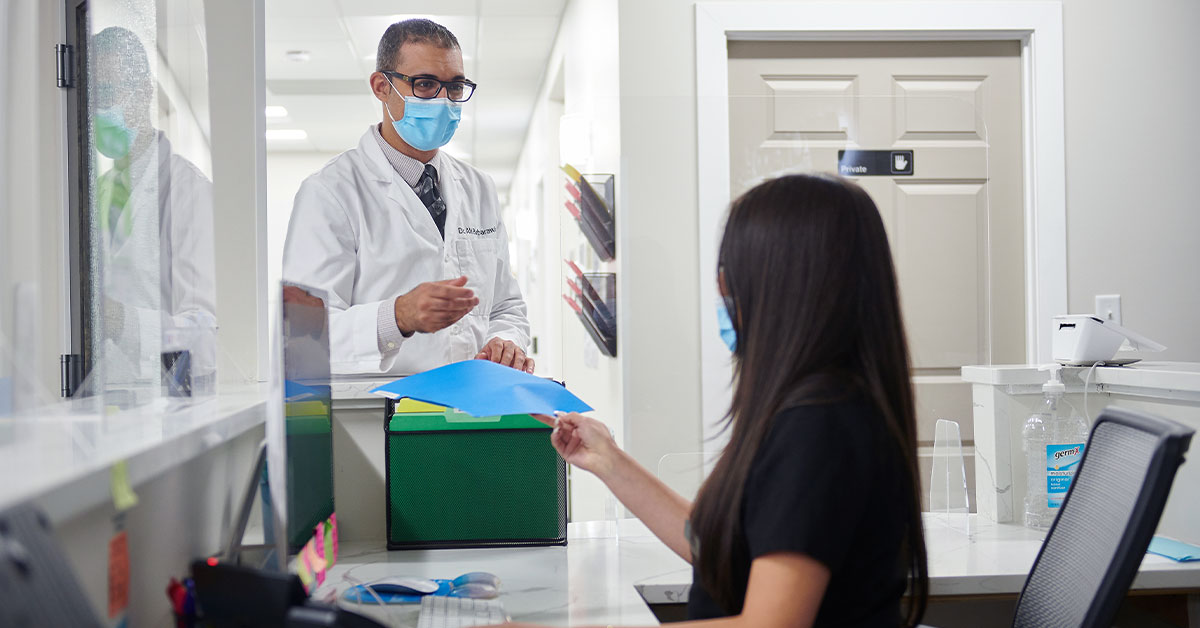 Following the death of George Floyd in May of 2020, Chicago Lake Family Dental was destroyed during the resulting civil unrest in Minneapolis. Practice owner, Ali Barbarawi, DDS, knew immediately that he would rebuild in the same location so he could continue serving his patients. His Patterson team and his employees were with him through the entire process.

When George Floyd was murdered by a police officer in Minneapolis on May 25, 2020, cities across the country erupted in protests. In the same neighborhood that became synonymous with racial injustice in America, Chicago Lake Family Dental found itself in the center of both a historic shift and a life-threatening pandemic. What would happen within the next few days would change the trajectory of the family practice on Chicago Avenue for years to come.

At first it was just a few broken windows, but then came the looting and the fire. When civil unrest in Minneapolis led to Chicago Lake Family Dental being destroyed, several important questions loomed for owner Ali Barbarawi, DDS. The first was whether he would rebuild his dental practice on the same spot in the same neighborhood where civil unrest would continue to simmer. The second was what help he’d need to ultimately serve the community of patients he’d been treating since he purchased the practice in 2017.

Even before the fires were completely put out, and smoke was still burning the inside of his nose, Dr. Barbarawi told Patterson Representative Kevin Malecha that he wanted to rebuild as soon as possible. Malecha, who would become the point person for the massive rebuilding project – one that he called “life changing” – started working on the first few small steps as swiftly as possible. Second, Dr. Barbarawi required a frank assessment of the structure and what would be needed to turn the remnants of destruction back into a working dental practice.

“The first thing was to let the doctor know that we were going to be with him every step of the way,” said Malecha. Dr. Barbarawi found losing Chicago Lake – his first practice and everything in it– devastating, but the thought of being able to rebuild provided him with a unique kind of momentum, one that would ultimately help shape the practice of his dreams.

“We were in shock,” remembered Dr. Barbarawi, when he first got the call that his dental practice was on fire. He said after George Floyd’s death, things evolved very quickly in the Minneapolis neighborhood. “It was devastating to everyone,” he said. “But we weren’t expecting the dental office to be affected.”

The night Dr. Barbarawi’s practice was destroyed, protests were centered several blocks away, and only a few miles from where Floyd was killed. Each day, after the video of Floyd’s murder circulated on a 24/7 news cycle, protests grew. The neighborhood police precinct was burned to the ground and squad cars set on fire. And still neither Malecha nor Dr. Barbarawi expected the dental practice to be targeted.

But by May 29, even with the National Guard deployed and a mandatory 8 p.m. city-wide curfew, the windows of Chicago Lake were smashed, equipment was stolen and a fire lit. Malecha said because the fire department was already strained and having challenges safely getting in and out of the area, many of the businesses burned pretty quickly. At one point, the fire department had to knock a hole into the roof so they could pour water inside to extinguish the flames.

By the next day, the practice was in ruins. Dr. Barbarawi sent Malecha photos of the destruction. “I’ll never forget it,” Malecha said. “I asked him if he wanted to rebuild and he told me this is where my patients are and they need me and yes, I will rebuild.”

For Dr. Barbarawi, who admitted that it took a few days to truly absorb what had happened, being able to continue to treat families he had formed relationships with was the focus of the rebuild, which would take about a year and three phases. Dr. Barbarawi said that his conviction to rebuild mattered in a neighborhood where many businesses still haven’t reopened and where dental care is already scarce. “Some of the families were visiting our office for more than 10 years,” he said. “They depended on me as their dentist.”

Chicago Lake is unique in the area because it accepts Medicaid, ensuring that children and the disabled, who frequently are underinsured, receive treatment. Dr. Barbarawi is passionate about this and the community took notice.

A GoFundMe for Chicago Lake raised more than $100K for the rebuild, with support coming from across the nation. With more than $1 million in damages, Dr. Barbarawi also applied for small business grants and other loans to help get him set up again. He also would need to tap his own savings.

When Malecha met Dr. Barbarawi to tour the site on June 1, 2020, they talked frankly about what would be required to start the rebuilding process. Malecha brought in a few key people from Patterson, including Tony Groen, an equipment specialist, as well as other experts in both design and construction.

“It wasn’t just a business,” Dr. Barbarawi said. “Patterson really wanted to help.” Because the insurance wouldn’t pay for all of the damages, having a service provider that could reach out directly to manufacturers and other suppliers helped to stay on budget and on time.

“Looking at the positive side,” the doctor said, “we were able to draw a new outline that serves our patients better. We made the office more accessible for disabled people. And keeping in mind everything that happened in 2020 with COVID, we were able to rebuild with an environment that minimizes COVID spread with maximized infection control.”

A few features of the new practice include separate treatment rooms with smart HVAC and digital technology, as well as more space in the waiting area. Dr. Barbarawi also decided that he wanted to invest in state-of-the-art management software so he could evolve the practice with the needs of his patients. Chicago Lake is getting ready to do implants on-site, too, something that he couldn’t do in the former building.

As one of the experts who helped outfit the new office with equipment, Groen was on-site just two days after the destruction. “We talked with Dr. Barbarawi about what happened,” he explained, “and what his goals were moving forward.”

As soon as everyone understood that the main focus was on rebuilding, Patterson’s crew started working on the design and equipment layout immediately. “Because of the extensive fire, smoke and water damage to his existing equipment,” Groen said, “he needed to replace all six operatories.”

The team made bringing in contractors and getting assessments on structural damage as mission critical from day one. Patterson helped guide the process, making it a team effort each step of the way.

Jared Bye, general manager of Patterson’s Eagan and Fargo branches, said that this was a big process with a lot of moving parts. “We’re very fortunate to have great relationships with our strategic manufacturer partners,” he explained. “In this particular case, A-dec really stepped up in a big way. We’re grateful for that tremendous partnership and the like-minded core values of always putting the customer first.”

Today, where the doctor and Malecha previously stepped over charred rubble there is now a beautiful reception area with sleek glass and brand-new office equipment.

“Dr. Barbarawi spent nearly $300K on equipment in total,” said Malecha. The first few rooms were installed and outfitted by the end of 2020 with an official phase completion by February 2021. Adding X-rays, digital sensors, lights, chairs, cabinets, handpieces and sterilizers would come next. By April 2021, four of the six new operatories were completed. In all, it would be 11 months from the time of the fire until Chicago Lake Family Dental officially began treating patients again.

“He’s fully equipped,” said Malecha. “He was probably one of the first people to rebuild. There are businesses here that still haven’t rebuilt. We knew he was very eager to get open.”

Dr. Barbarawi said he personally learned a lot from the experience, namely that catastrophes can happen to anyone, anywhere. And it can happen quickly. “Being prepared for that, whether with insurance or by putting assets on the side as a backup is very important,” stressed Dr. Barbarawi. “Second, so is building a relationship with a dental supplier.”

By the time Chicago Lake welcomed patients back into the rebuilt practice, Dr. Barbarawi was happy to report that his entire team also came back to work. He didn’t lose a single staff member during the entire experience.

“All of them came back,” he beamed. “They told me we share the same vision.”

This article was originally published in the summer 2022 issue of Advantage by Patterson Dental.

At Patterson Dental, we are committed to partnering with dental practices of all sizes to help oral health professionals practice extraordinary dentistry. We do this by living up to our promise of Trusted Expertise, Unrivaled Support every day.
https://www.pattersondental.com/
Total
2
Shares
Share 2
Tweet 0
Pin it 0
Share 0

5 ways to show your office manager they’re a rockstar