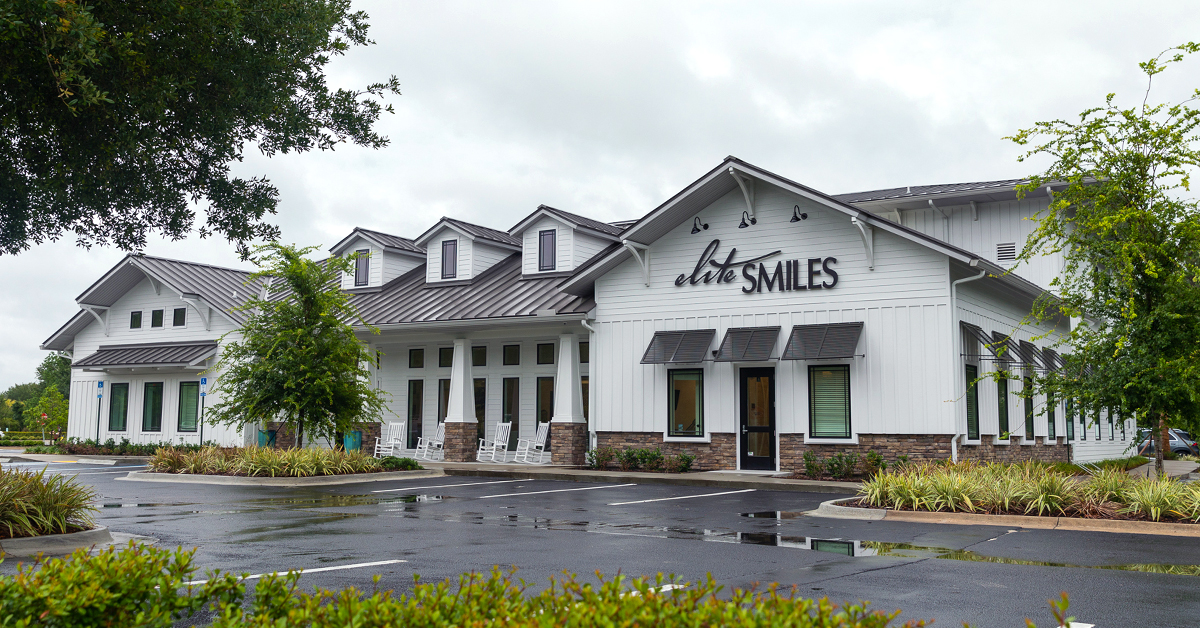 Steven Freeman, DDS, is the owner of Elite Smiles, a full-service dental office located in St. Augustine, Fla., that provides pediatric dentistry, orthodontics for all ages, Invisalign, implants, general dentistry, sleep apnea treatment and more. With nearly all dental specialties covered, patients rarely get referred to another dental office. But Freeman did not always have the space for all-inclusive dental services.

Steven Freeman, DDS, is the owner of Elite Smiles, a full-service dental office located in St. Augustine, Fla., that provides pediatric dentistry, orthodontics for all ages, Invisalign, implants, general dentistry, sleep apnea treatment and more. With nearly all dental specialties covered, patients rarely get referred to another dental office. But Freeman did not always have the space for all-inclusive dental services.

The first practice he purchased had just five treatment rooms within its 1,800 square feet. A unique feature was that the operatories were completely enclosed, which his patients appreciated. When designing his new 11,000-square-foot, 24-operatory office he took his patients’ suggestions into consideration. “We always got tremendous feedback from our patients,” he said. Some patients expressed that privacy was a top priority for them. “Many told me that, in previous dental office they went to, they felt that what happened in their treatment room was everyone’s business up and down the hallway. So, we wanted to create a more intimate atmosphere in the new building.”

Deciding to become a dentist

Freeman’s father, who worked as an oral surgeon, inspired him to go into dentistry himself. “Growing up in Chicago, I was too much of a momma’s boy to go away for college, so I did my undergraduate studies at the University of Illinois. Then I went to The Ohio State University College of Dentistry.”

Freeman then moved to Florida, worked for a large practice chain for about three years and then set out on his own in 2008. “We originally intended the practice to be purely cosmetic,” he said. “I just wanted to do veneers all day long. But I chose a horrible year, with the housing crash in 2008, to focus on large elective surgeries and cosmetic procedures. No one wanted to do any of that.” So, he switched gears and began practicing general dentistry.

About seven years into it, he realized that corporate dentistry chains were buying up solo practices in his area. “These equity groups saw an enormous amount of money could be made through dentistry because of its potentially high profit margins,” Freeman said. “I knew I needed to grow in a capacity that made my practice different or I would either be bought or, worse, driven out of business.”

Charting a plan for practice growth

Knowing he would need to increase cash flow to start paying for the new building, Freeman rented the space another dentist had vacated across the parking lot from his office and converted it into a surgery center.

“The temporary space I rented was about 2,000 square feet,” he explained. “I brought in a periodontist and some new technology, including the Orthophos XG 3D, so we could offer more services while we were still confined in our tiny spaces. I was able to keep my implants, extractions and all of the other periodontal work that needed to be done in- house.” The practice took off from there and started growing at a steady pace.

Patterson Dental was crucial to building out the surgery center because, although it had been a dental office previously, they encountered some challenges. Freeman and Technology and Equipment Specialist John Weidenaar had an issue trying to locate the plumbing, upgrade the electrical and install all the new equipment. Freeman also expressed concern about not being able to transfer all his equipment to the new building.

Luckily, Weidenaar had been a part of the design team for the other dental office and obtained a copy of the original plans. “If it wasn’t for that, it would have been a real struggle to find all the plumbing and specs and get the new equipment installed,” Freeman said.

Knowing that childhood visits to the dentist were traumatic for a lot of people, Freeman wanted to create a space that didn’t resemble a conventional dental office at all. “We started by removing the front desk and adding a concierge greeting station, much like what you would find at a restaurant,” he said.

The design of the roughly 2,500-square-foot waiting room and the rest of the 11,000-square-foot office was inspired by home designer, décor expert and co-host of HGTV’s Fixer Upper Joanna Gaines, who Freeman is a fan of. “She goes for the updated farmhouse look,” he said. While working with the engineer and interior designer recommended by Patterson Dental, Freeman based a lot of his design decisions by asking, “What would Joanna do?”

The lobby has a living-room atmosphere with vaulted ceilings, lots of windows that flood in natural light, clutter-free operatories and hallways, natural wood furniture and accent pieces, muted fabrics with pops of color and a separate waiting room and operatories for kids complete with murals of familiar comic characters.

Freeman believes having the latest 3D technology and patient education tools in his office sends a reassuring message to patients. “They see these technologies as a statement that, ‘Hey, this office knows what they’re talking about,’” he said. “We don’t charge for our cone beam scans because the real profit for me is using this technology to do cases I otherwise wouldn’t be able to do. Also, the scans boost patient confidence because then we can take them through that kind of co-diagnosis. If they can see what you’re talking about, they’re much more likely to proceed with treatment.”

Implementing same-day crowns ran parallel to Freeman’s prioritization of patient convenience; he didn’t want patients to have to make a second appointment to have crowns seated. “With CEREC and 3D milling, we’re able to increase the convenience factor for the patient, making it much easier for them to say yes to the treatment that they need,” he stated.

He uses his iTero Element intraoral scanner to digitally scan Invisalign patients and show them the results within minutes. “Invisalign is a powerful selling tool,” he said. “And patients don’t have to gag on all that impression material or go through a retake.”

Similarly, the interactive patient experience with the 3D cone beam images makes all the difference. “I use 42-inch monitors to show the patients what I’m seeing on the X-rays while I’m talking to them about proposed treatment,” he said. “They always ooh and aah when you show them their mouth in three dimensions. They’re just blown away by it.”

Thanks to the successful integration of 3D technologies and enhanced marketing, Elite Smiles grew 100% in collections in the first 12 months, and at a roughly 80% plus rate for the last couple of years. Dr. Freeman was seeing around 100 new patients a month in the old practice after opening the surgical center. In the new location, before the coronavirus pandemic started, he saw about 200 new patients a month. His staff has grown by almost 50%.

Although the process has been fun, Freeman acknowledges the challenge of ramping up to a team of 35 employees. Fortunately for him, they consistently manage to work any issues out. “Business owners always say, ‘Good help is so hard to find. But I have the best team I’ve ever had,” he said. “It is truly amazing watching them get along as well as they do.”

Freeman has a very dynamic, easy-to-navigate and informative website. He has also written two books that he hands out to current and potential patients for free – his first book focuses on oral health practices that impact holistic health, while his second book centers on orthodontics and Invisalign.

Freeman noted that two things inspired his writing. “I wanted to promote the mouth-body connection as well as differentiate our practice from other practices,” he said. “If you just get a flyer in the mail, you may wonder what’s the difference between this dentist and the one down the road? We wanted the books to demonstrate the ways that we’re different. I think it also shows a little bit more authority, providing the information they need to make treatment decisions that they can refer back to during that process.”

Freeman has appreciated Patterson’s attentiveness to building his practice. “There’s no way you can take on a project of this size without having a real, true partner,” he said. “Patterson has been there every step of the way. Weidenaar is always available to me – he’s a friend and someone I am in touch with regularly. Ginger Harris, my sales rep, is always passing on information that helps grow my practice, and she is very responsive to every need that arises. You can’t really tackle something of this magnitude without a group of people who know what they’re doing. Without those Patterson Dental connections, it would have been impossible to get this building up and all put together. So, for that, I’m truly thankful.”

A longer version of this blog post originally appeared in Best Practice.

At Patterson Dental, we are committed to partnering with dental practices of all sizes to help oral health professionals practice extraordinary dentistry. We do this by living up to our promise of Trusted Expertise, Unrivaled Support every day.
https://www.pattersondental.com/
Total
3
Shares
Share 1
Tweet 0
Pin it 2
Share 0