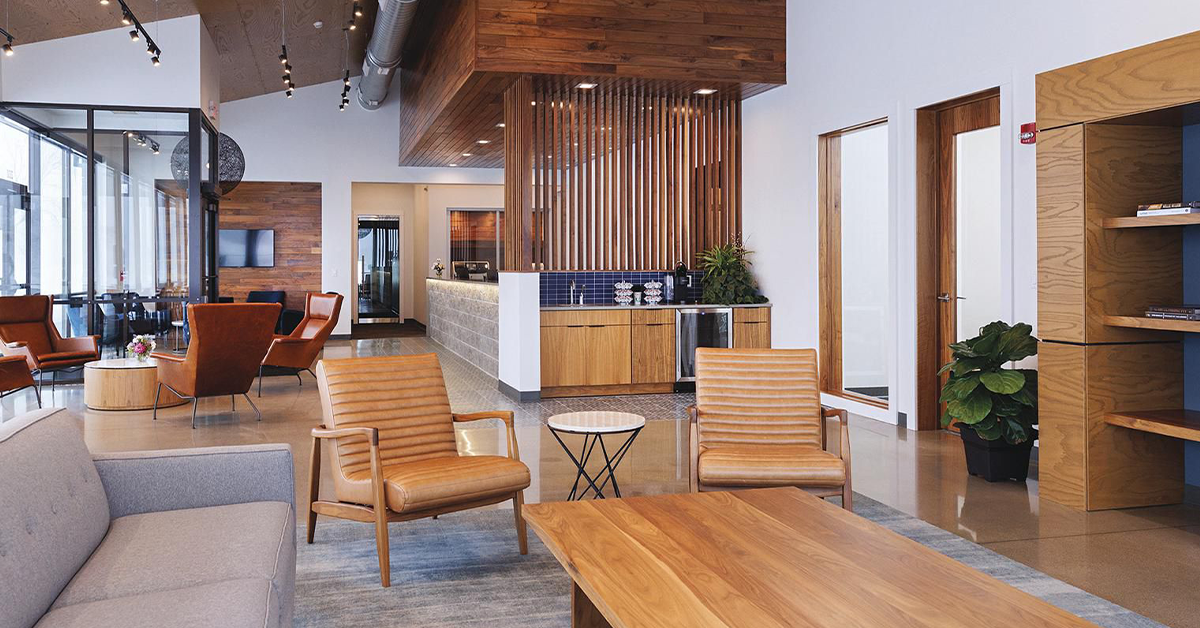 A Midwestern architecture firm is helping dentists design practices that reflect their visions and personalities while also addressing patient and team needs.

Something interesting is happening at some North Dakota dental practices. It could almost be called a movement. And it’s growing – with gutsy dentists (like those at Arch Dental, McDonald Dental Group and Missouri River Dental), Patterson Dental representatives (including territory sales rep JP McDonald and dental equipment specialist Kenton Hochhalter) and an architect leading the charge.

Chris Hawley, AIA, one of the principals of Craftwell Architecture + Construction, is at the helm of this emerging trend. He and his partners specialize in hospitality, healthcare and commercial new builds and remodels. Whether they’re building a business or home from scratch or revitalizing older downtown buildings in a small town or in one of North Dakota’s cities, he “listens” to the people and the buildings to bring out their true spirit.

“We do a ton of adaptive reuse of significant and historical buildings,” Hawley said. “We’ve done a number of things throughout the upper Midwest using buildings that are super unique and worth saving; Arch Dental was one of them. Some were good opportunities like the McDonald Dental office. All are unique.”

Hawley and his team at Craftwell Architecture + Construction have developed a deep understanding of what dental practices require and how to incorporate that in a way that reflects dentists’ individual personalities.

Take Arch Dental, for instance. The name reflects the pointy arches on the façade of a mid-century former Fargo chamber of commerce building that Hawley called a “jewel box.” It stands out with its clerestory windows, oversized hanging globe lights, box-like framed-out operatory space and inverted columns. It houses two businesses – Harnish’s dental practice and the ecce yoga studio of Brenda Weiler (Harnish’s wife) – partly because they wanted to practice their professions together and so that the space Harnish doesn’t yet need is functioning and creating income.

Hawley described Harnish’s previous office as tiny. “To be honest, I don’t know how he worked there for so long, and I think Derek doesn’t know either,” Hawley recalled. “The new space fits him perfectly, but if he wants to add doctors, this building is ready.”

The original building had an open office style with the center section as open space. To create privacy and acoustic separation, Hawley’s team built what he describes as a “wood box” that doesn’t ruin the original architecture of the building. “We left this beautiful floating pyramidal or waffle slab roof, and all the lighting is original,” Hawley said. “It still has an airy feeling, but has the functionality of closed operatories.”

One of the many beautiful things about the building is the glass ceiling in the hallways. Five operatories in the brick side wing space don’t have windows, but the spaces between are all glass. When you step out into the hallway, daylight spills in from above.

“The windows that march along the side are called clerestory windows,” Hawley explained. “They dump light into the hallways through the glass ceilings. It’s very bright and cheery. We capped that area so you’re not hearing equipment running or discussions that are happening in the operatories.” The yoga studio shares bathroom space with the dental office, with access from each side, but otherwise they’re autonomous spaces with their own entrances. “In my mind they don’t collide,” Hawley said. “They have a nice relationship. So yeah, super fun.”

Hawley describes Tim Anderson, DDS, of Missouri River Dental, as “big into technology, education and advancing dentistry. If there’s a poster child for a dentist, this guy might be it. He’s passionate about all of it.”

Anderson holds continuing education events in his new building to help other dentists learn about new technologies. “It seems like he’s kind of a steward of the profession,” Hawley said. “I feel that way about architecture. It’s part of my job to advance the craft as much as I can. Tim wanted a space where he could do that and also make patients feel super comfortable.”

Hawley appreciates the importance of understanding a dental team’s daily flow, including what makes work enjoyable. “Having really nice break rooms to get away and have some privacy, grab lunch or have staff meetings separated from patients creates a holistic environment,” Hawley said. “You’re making sure you have a building that people want to go to work in. Retaining good staff requires investing in a nice office. These dentists are making that commitment with their buildings.”

Similar to Arch Dental, the McDonald Dental Group space gave an abandoned building a new lease on life. Its commercial location offered good visibility, convenient access and great parking while taking the cost of land and ground-up construction off the table. Hawley described it as having a “unique point of departure not designed by them,” which they overcame but made feel intentional.

“We don’t have a certified interior designer, but some of the architects we employ focus on architectural interiors,” Hawley explained. “We spent a lot of time and energy with the docs at McDonald Dental on the lobby and waiting rooms. They had a pretty strong sense of what they wanted – a ‘modern mountain esthetic.’ They weren’t going to tear the building down, so we had to work backward from some of the existing finishes.

“McDonald Dental is one of the nicest break rooms we’ve ever done,” Hawley continued. “Pete and Chris told me the staff likes to hang out as a group. They told me, ‘This is where our staff spends time, and we want to invest in that.’”

Hawley and Patterson territory rep (and brother of the McDonald dentists) JP McDonald have worked together on several practices and have a mutual admiration for how each approaches their job. “He loves design,” Hawley said of McDonald. “He’s been telling potential customers, ‘Hey, these guys are doing really good work, and maybe they could offer some more innovation in what dental offices look and feel like.’ He’s one of our biggest cheerleaders.

“I would say that’s a two-way street,” Hawley added. “We respect what Patterson provides to their doctors, and I think they respect our ability to reinvent how dentists practice a little bit. There are certain necessities and efficiencies that must be built into a practice that are important, but I can say we’ve never done the same thing twice.”

Hawley’s group approaches an office design like they approach a high-end house. They create a new environment every time based on the practice owner’s preferences and how they want to “live” in their office. After all, that’s where they spend most of their days.

Designing with technology in mind

Hawley finds it interesting that every dentist he’s worked with has a different relationship to technology. “Some want it all hidden; some celebrate it,” he said. “The McDonalds wanted their milling machines front and center so patients could watch them work.” Some practices prefer to tuck that equipment around the corner, but Hawley said that wasn’t true of these three. “They’re expensive pieces of machinery,” Hawley said. “It’s nice to let patients know where some of the money goes so they understand that there’s a significant investment involved in their care, and they get to see it at work.”

Hawley said that the dentists on these projects wanted to project warmth without making it feel dark with too much wood. “But we injected a number of little wood pieces throughout all three of these projects, just so that they felt warm and comfortable and more like a house than an office,” he said. “They’re commercial interiors, but they don’t feel like the standard. We try not to use lay-in ceiling tiles very often because I think it immediately says ‘office.’ So, you’ll notice that there is no ceiling tile in the common spaces or the lobbies because that sets a different mood. We do use acoustic ceiling tile where you need to dampen noise. But when we do use them in the operatories, we drop down these warm wooden ‘clouds’ from the ceiling so that patients don’t feel like they’re sitting in a sterile environment. It’s always about trying to make sure they’re comfortable. They might be having their teeth worked on but feel more like they’re sitting in their favorite chair instead of a surgery center. We try to get as far away from that as possible when it comes to designing interiors.”

Looking back at these three projects, Hawley said, “They all have a slightly different approach to how they want their practice to feel. All of the details are a reflection of the particular doctor’s practice, how they think about their staff and their patients and how they want to be more efficient and practice throughout the day.”

At Patterson Dental, we are committed to partnering with dental practices of all sizes to help oral health professionals practice extraordinary dentistry. We do this by living up to our promise of Trusted Expertise, Unrivaled Support every day.
https://www.pattersondental.com/
Total
7
Shares
Share 7
Tweet 0
Pin it 0
Share 0

Rebuilding a dental practice after tragedy

5 ways to show your office manager they’re a rockstar