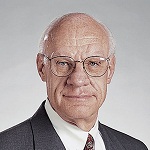 Pete Frechette’s leadership as Patterson’s CEO (1982-2005) helped the Company shine. Now it’s his turn in the spotlight. Pete is among a handful of industry giants recognized by First Impressions as an inductee into its Dental Distribution Hall of Fame (April issue). Under Pete’s watch, Patterson grew to a leadership position.

While Pete’s influence on the business is now in the role of chairman of the board (a post he’s held since 1985), his imprint remains stamped on a Company culture rooted in doing right by customers – and employees. The Employee Stock Ownership Plan created in 1990, for example, is still going strong today. Additionally, Pete has helped the Patterson Foundation gain serious traction. He and other Company executives formed the Foundation in 2000 to help underserved people live healthier lives. In the process of determining who should be in their inaugural Hall of Fame class, the folks with First Impressions say Pete’s name popped up again and again. For these reasons and many more, it’s easy to see why.

Preparing for success: Cavity preps and the best tools for long-lasting restorations