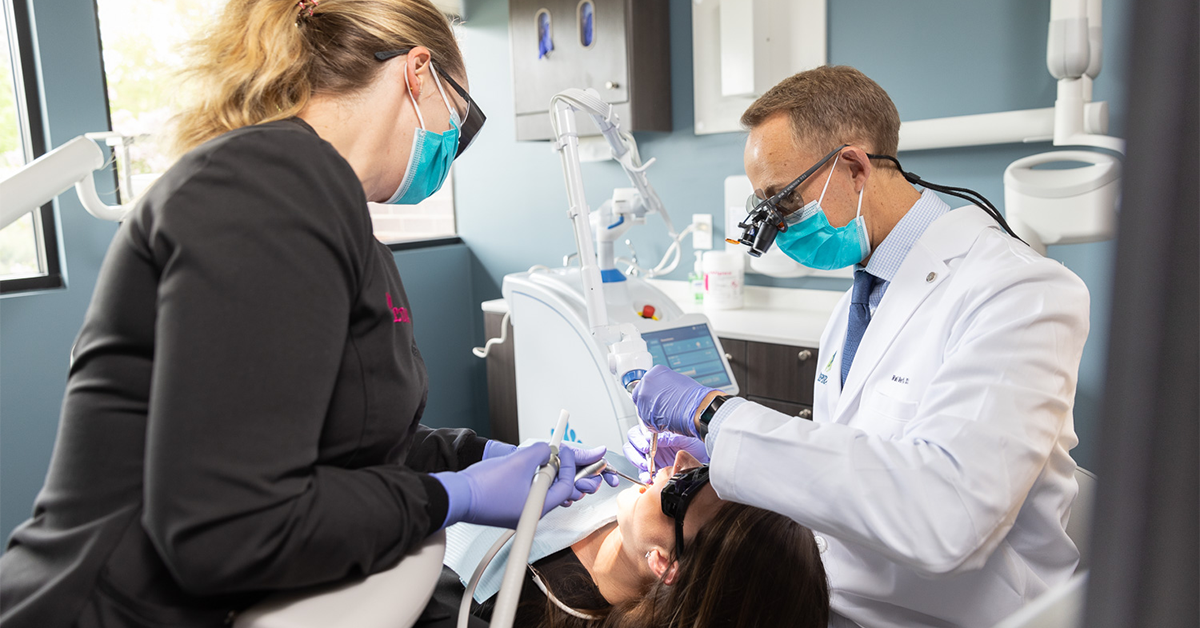 During his 20-year general dentistry career, Ryan Henrichsen, DDS, MAGD, saw hundreds of patients who were suffering from issues that had more to do with the structure of their mouths and throats than dental problems. “I was doing a lot of bite splints and guards because the dentists I was practicing with didn’t know how to manage bruxism and temporomandibular joint disorders [TMD],” he recalls. “I really started helping people by just doing what I was taught by the masters I learned from.”

As a partner at Gentling Dental Care in Rochester, Minn., Henrichsen found himself building many mandibular advancement devices, treating TMD and focusing more on the airway component of these conditions. When dental professionals began to take advantage of computed tomography (CT) scanning technologies to assess patients’ airways, “I knew that things were changing big time,” he says.

After mulling over the idea of opening a stand-alone office that focused exclusively on airway, snoring and TMJ issues for about seven years, Henrichsen opened Respira – Airway, Snoring, & TMJ in January 2021.

Before joining Henrichsen in the practice, associate Matt Merfeld, DDS, saw so many crowded and misplaced teeth that he decided to complete a two-year course in orthodontics. When he started working with Henrichsen, he took additional airway training. Merfeld became a Breathe Institute Ambassador and began treating tethered oral tissues (TOT), which contribute to upper airway resistance. He and Henrichsen then took hands-on training for Convergent Dental’s Solea Sleep CO2 laser so they can treat upper airway resistance.

Merfeld says that one in ten infants and children are affected by TOT. If the condition isn’t addressed, adults compensate or “maladapt.” “We’re seeing a lot of neck pain and shoulder pain,” Merfeld says. “And just general tension. Those with the condition use the floor of their mouth and their neck muscles to compensate so they can breathe normally. There is this deep connective tissue attaching to the tongue muscles; it’s not just this little frenum that you can see visually.”

The condition can lead to other associated tongue position issues. “For instance, in adults, if the back of the tongue can’t go up to the roof of the mouth, we’re going to see breathing problems,” Merfeld adds. “What’s the airway component of the tongue? It’s not just swallowing and speaking, it’s breathing.”

“We use Solea for soft- and hard-tissue procedures,” Merfeld says. “For surgeries, we use the soft-tissue function, which has a wavelength that vaporizes the tissue. It coagulates the blood cells, but it’s not burning or cauterizing them, so we see much gentler healing.”

Unlike other lasers, Solea is noncontact. “When you’re applying the beam, the tissue looks like it just starts to disappear,” Merfeld says. “We can do surgeries in infants in about 10 to 15 seconds with minimal to no bleeding. Healing happens rapidly, so within two weeks, the tissues look like we did nothing. It’s very interesting technology. And the benefit for a general dentist is using it for other functions: cutting hard tissues, extracting impacted molars, and prepping teeth. It’s very precise and can focus the beam down to the width of a human hair.”

“The same laser has an attachment we can use as a snoring treatment component,” Henrichsen adds. “It requires no anesthetic and takes 10 minutes or less. We just zap the soft palate tissue and the uvula area, and it shrinks the tissue. The treatment alleviates snoring for about a year to a year and a half.”

According to Johns Hopkins Medicine, about 45% of adults snore sometimes and 25% snore regularly. Of the population of people who snore, Henrichsen says that roughly two-thirds have sleep apnea. “So one-third we could treat with the Solea Sleep application,” he explains. “It’s pretty amazing and we’ve had some good results with it.”

Merfeld adds that a benefit of the Solea laser is that it doesn’t have as many settings as other lasers. “It’s operated more like a general handpiece. It has a traditional rheostat, and we control the energy of the beam as we’re cutting. You start off at very low power and bring it up to the energy level you need. Solea is very user-friendly and versatile.”

Switching to the Solea Sleep function requires only changing out a small handpiece. The software identifies what they’re using, what function they need and what the light pattern should be.

Henrichsen offers several devices to treat snoring. The Vivos (or the DNA appliance) is custom designed for patients by a proprietary diagnostic algorithm after measuring and analyzing the oral cavity and airway with cone beam computed tomography.

The practice’s protocol also includes having a myofunctional therapist work with patients, focusing on muscle therapy, tongue position, range of motion and other elements both before and after surgery.

Since the practice opened in January, Minneapolis-area dentists have started referring patients and going to the clinic themselves.

While the plans for the Respira airway clinic were still in the idea stage, Gentling Dental expanded by acquiring three general practice offices. “Our philosophy is to keep local dentistry local,” operations manager Krista Landgrebe says.

“We strive to maintain the existing individual culture by keeping the original practice name and staff. We run them all independently, but we streamline their processes.” Henrichsen’s group now has a patient base of about 8,500.

When Respira opened, they thought having only an office manager, Henrichsen and his assistant would suffice for about 18 months, but after only four months, they’re signing on their fourth provider, Alyssa Daley, DDS, because they’re so busy. The success of the new treatments made the staff even more excited about what they do.

Landgrebe says that patient testimonials they’ve received are having a big impact as well. “We’re watching how nervous they are at their first appointment when they don’t know if this is going to help, to the day they get their appliance and are so excited, to seeing over the months how much it’s impacted their life.”

This blog post is an abridged version of a feature story in Advantage by Patterson Dental. Read the full article here.

At Patterson Dental, we are committed to partnering with dental practices of all sizes to help oral health professionals practice extraordinary dentistry. We do this by living up to our promise of Trusted Expertise, Unrivaled Support every day.
https://www.pattersondental.com/